On The Border Mexica...

A revolution that treats people like people – that makes them feel warmed, loved, and important, all before they take a sip of the best drink in town.

And it’s not just kindness and coffee that we sell at 7 Brew. We are cranking out delicious infused energy drinks, Italian sodas, smoothies, teas, and more like NWA has never seen.

The dream came alive in February 2017 with our first store in Rogers, AR, and the best is yet to come!

In the early 90’s, Oregon native Ron Crume saw a growing community in Northwest Arkansas but a lack of coffee shop options that his family was used to on the West Coast. Ron was preoccupied building custom homes in Holiday Island, Arkansas, but the idea for 7 Brew Coffee never left his mind.

2008 saw the Crume family back in southern Oregon where Ron owned Northwest Alloys, a foundry and machine shop. All along, the vision of an amazing drive-thru coffee shop in NWA was becoming increasingly clear.

Ron wanted a delicious coffee experience that was fast, consistent, and positive. He wanted to expand the usual coffee shop drinks to include Italian sodas, flavor-infused energy drinks, real fruit smoothies, and much more. But more than anything else, Ron wanted to create a coffee culture that was always energetic, upbeat, fun, and welcoming to everyone.

A Crume family visit to Arkansas in 2015 revived the coffee dream, and Ron started taking steps to make it happen. But he wasn’t alone! Ron’s wife Lisa, their boys Jordan and Joel, their daughters Jerrine and Jaylen, Jerrine’s husband, Brandon and their children, Jayla, Brody, and Ryen, and Jaylen’s daughter, Jaycee were along for the ride!

And so in August of 2016, the Crume/Henson families packed up their lives and moved across the country – after a delayed flight, a teething toddler, a few flat tires, and a car/deer collision. Before long, construction began on the 7 Brew buildings and the dream was coming alive.

We’re excited to welcome YOU into this crazy family of ours and bring the coffee revolution to Northwest Arkansas and beyond. 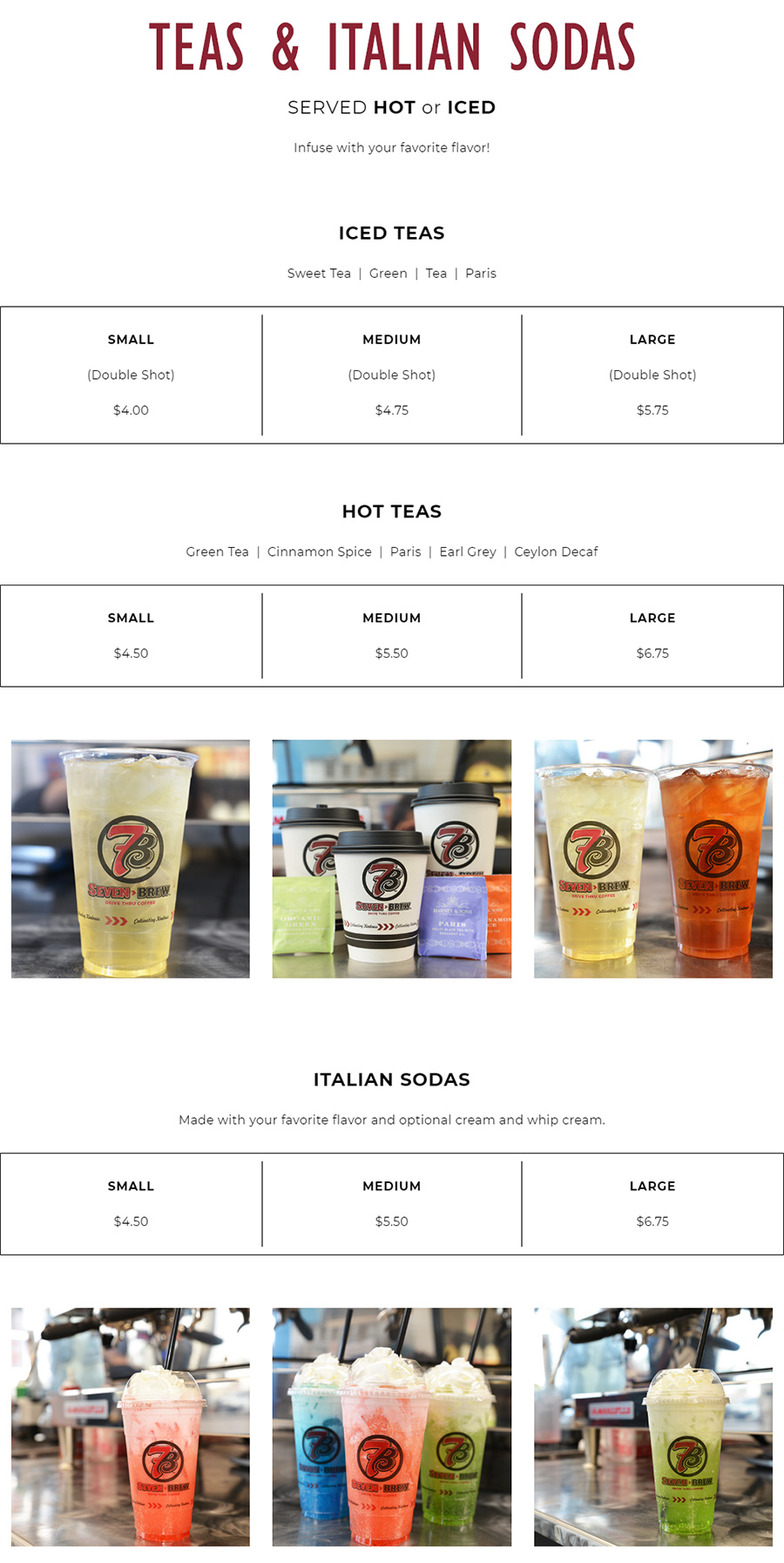 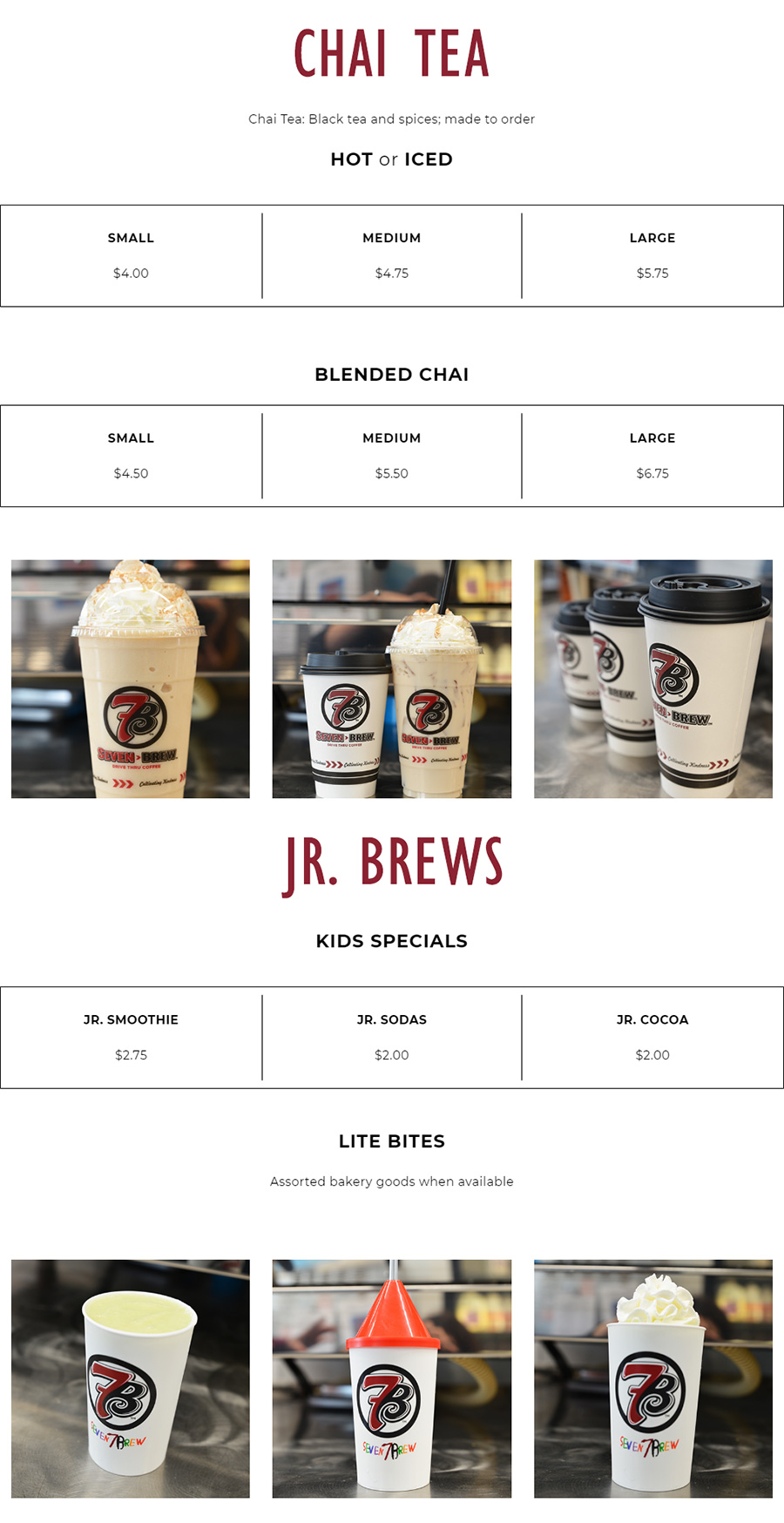 I loved getting to see the story of Seven Brew on TV with Northwest Arkansas Alive! It really made me want to try all of 7 Brews Coffees. https://youtu.be/6Ylbmb970YM

I was at the 52 location and was double charged for a medium snickers coffee. I have tried to call the number listed on the website but there is no way to talk to anyone or leave a message. (How convenient) I also went back to the store and sat in line for 15 plus minutes while they tried to research the transaction and came back and said they could not find it and offered to reimburse my cc but offered nothing else for my trouble. I left my name and number to be contacted by a manager but no luck there either. My cc has still not been reimbursed. I will continue to be persistent until my card is reimbursed. Would not recommend this coffee drive thru!!

I drive a truck and have to walk up. I was at the store on central in bentonville an have left twice with no coffee. The employees in the store looked right at me and continued to wait on cars that came in while I was waiting to order.

I go here every time I can. I’ve always enjoyed the drinks and the time talking to the barista